St. Francis Xavier was born at Xavier Castle, near Pamplona, in Spain in 1506. He went to the University of Paris when he was eighteen, where he studied and taught Philosophy. Here he met St. Ignatius Loyola, who was one of the seven who founded the Society of Jesus.

St. Francis joined the Jesuits and when he was thirty-four and St. Ignatius sent him as a missionary to the East Indies. The king of Portugal wanted to give him presents to take along and a servant, but Francis refused his kind offer and explained, “The best way to acquire true dignity is to wash one’s own clothes and boil one’s own pot.”

During his travels as a missionary in Goa, India, Japan and other lands of the east, St. Francis converted thousands of people to Catholicism. In fact, he baptized so many people that he became too weak to raise his arms. Francis’ love for Jesus was so strong that he could not rest at the thought of so many people who had never heard the Gospel. He found that there were so many villages where there were Christians but no priest to say Mass or teach them their prayers and the Commandments of God’s Law.

When he landed at Goa in India, he would go down the streets ringing a little bell and inviting the children to hear the word of God. Then he would take them to a nearby Church and teach them Catechism and prayers. He made little lay apostles of them and invited them to spread the faith they had learned.

There was nothing St. Francis wouldn’t do to help people. During his painful journeys and hard work, the saint was full of a special joy that came from God. St. Francis longed to get into China, into which no foreigner was permitted. At last, the arrangements were made, but he fell ill.

He died almost alone in 1552 on an island off the Chinese coast when he was just forty-six-years-old. Today his body is preserved in a church in Goa.

We celebrate his feast day on December the 3rd each year with a whole school Eucharistic celebration. 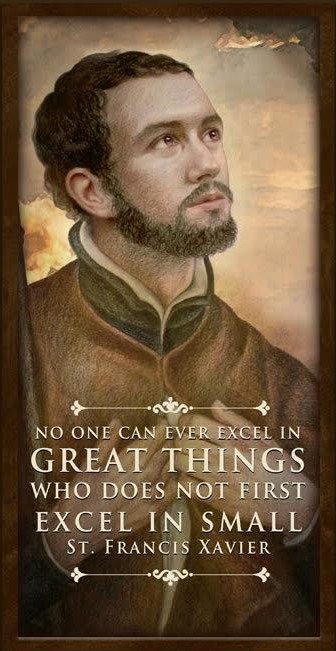 "A wish to bring souls to the heart of Jesus"